Localizing the Millennium Development Goals in the Philippines

The project intends to enhance the capacities of local authorities and citizens group in improving access by the vulnerable sector to MDG-responsive basic services. It utilizes the demonstration project strategy, a knowledge and problem solving and replication technology. This strategy is substantiated with participatory, gender-responsive, rights-based, anti-corruption and inter-local approaches as drivers and guideposts for localizing the MDG. It also provides assistance to selected cities in instituting improved information management on urbanization, the MDGs and the Habitat Agenda as well as the use of the UrbanInfo software especially in the setting up of Urban Observatories.

The project’s sustainability is anchored on a deliberate and systematic knowledge development and management mechanism that is built into critical LGU/CSO/community-level localization activities. Local government units were chosen as demonstration sites and knowledge hubs and are expected to lead the replication, expansion and scale-up of MDG localization beyond the project life. The project, started in October 2005, was completed on September 2007. 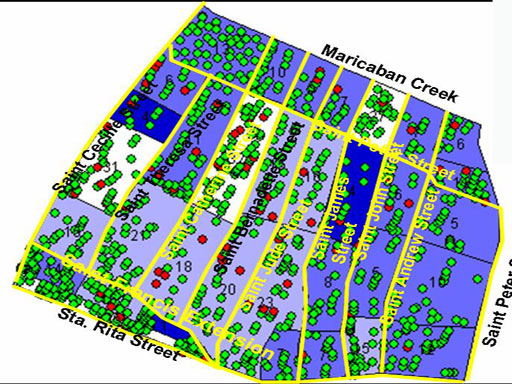 This is one of the CBMS maps that plot MDG indicators at the household level. The example above identifies households (in red) whose family heads are not employed.

The L-MDGs in Key Cities in the Philippines adapted the demonstration project mechanism developed by UN-Habitat which aimed to demonstrate solutions and innovations in increasing access to public goods and services by the poor and disadvantaged groups and communities. In 2006, the demonstration project strategy was implemented in four cities (Island Garden City of Samal, Science City of Munoz, Puerto Princesa, Sorsogon) and one municipality (San Vicente, Palawan).

Departing from previous approaches where project development and planning is a function of the planning office and the engineering office, the demonstration project template was designed to ensure that the sector stakeholders are consulted from the inception of the project and are engaged in the project planning and development process. Eventually, the sector stakeholders contributed resources, time, effort and expertise during project implementation.

A demonstration project is a relatively self-contained small-scale capital investment or technical assistance project, the purpose of which is to “demonstrate” a particular approach and to show in practice how a specific type of problem can be addressed in a new or different way.

Using DGTTF inputs to leverage for local support, the demonstration project fund generated local counterparts in four cities and one municipality amounting to Php 12,891,177, an approximately 900% increase of what was originally disbursed to the demonstration sites: 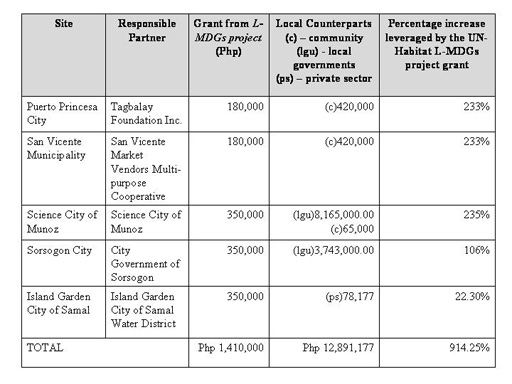 Results on the ground:

The L-MDGs program made possible the writing and publication of the results of the Local Governance Performance and Measurement System (LGPMS) conducted by the Bureau of Local Government Supervision, Department of the Interior and Local Government (DILG-BLGS) in 2005.

The publication entitled The State of Cities of the Philippines: Communicating the State of Performance, Productivity and Development Conditions was launched on November 29, 2006 during the 7th MDG Localization Business Meeting at the Asian Institute of Management, Manila, in both soft and hard copies, and is available in the web. ​