This publication was produced by the Housing and Land Use Regulatory Board with technical assistance from UN-HABITAT in partnership with the Philippine Institute of Environmental Planners, and funding support from the Government of Spain and Development Account Project.

Despite the suspension of work and classes on October 17 due to a public transport strike affecting all of Metro Manila, about 40 representatives from five Philippine national government agencies showed up for the first training workshop on Building Climate Resiliency through Urban Plans & Designs (BCRUPD), a German-government-funded project with UN-Habitat Philippines as lead implementor in partnership with the Housing and Land Use Regulatory Board (HLURB).

The five participating agencies were HLURB,  the Climate Change Commission (CCC), the Department of Interior and Local Government (DILG), the Housing and Urban Development Coordinating Council (HUDCC), the League of Cities of the Philippines (LCP), and the National Economic Development and Authority (NEDA).

Alternating between presentations were breakout sessions where participants, grouped most of the time by national government agency, were tasked with exercises and specific outputs that entailed applying the concepts, practices, and processes that were discussed.

Serving as an occasional reprieve from the technical sessions was the Urban Fair, a small area in the workshop venue where participants could enjoy memory games, puzzles, and other recreational activities during coffee breaks. To test the agencies’ retention of the tenchincal input, an online quiz among the agencies using Kahoot, a game-based learning platform which was a big hit for the groups, was held towards the end of each day. Serving the same purpose, each morning the second day onward began with an exercise where participants made an alphabetical list of topics from the previous day’s discussions, one topic correspinding to one letter.

“The online quiz format showed that the things we learned here validates the systems-thinking approach,” said Anna Mendoza Abalahin, Technical Adviser at LCP. “And because of that, it strengthens the alignment of the different agencies and other stakeholders whenever we engage in workshops, planning, and design.”

The workshop, first in a series to be conducted under the project, met the anticipated turnout and enjoyed active engagement, with certain parts of the  technical input having resonated strongly with the participants.

Project examples such as floodable parks, an elaboration on urban heat island effects, and cost-benefit analysis as a tool for decision making on adaptation options were a few of these major takeaways.

“We’ve been concentrating so much on preventing hazards,” remarked Angelina Mamuyac of DILG, “but the segment on floodable parks showed that we can learn to ‘embrace’ and live with hazards.”

Neil Warren Patag of HLURB added, “Some of the concepts we already had a general knowledge of, but not extensively. So all the things presented were very useful in our work, especially the technical  discussions on walkability and mobility. A lot of the project examples that were shown can be introduced to local governments.”

“For us it was the crash course on cost-benefit analysis,” said Soleil Manzano of LCP, “because it enriched our initial knowledge about it and how it enhances the viability of projects.”

Ayesha Sarapuddin  of CCC became especially interested to know how urban heat islands and their effects can be included in adaptation plans: “The workshop content does impact the small decisions I now have to make at work and my everyday tasks.”

Murffy Gopez, speaking for the entire NEDA team in attendance,  shared, “We had a lot of ‘Aha!’ moments during the entire workshop. One of them was learning the distinction between urban planning and urban design. In the Philippines, the academe is focused more on urban planning. But we saw urban design as a crucial integrative tool. We also found that a lot of the project examples could be real-life applications of urban planning and urban design. Here in the Philippines, the first line of intervention against flooding in coastal areas is to build dikes, but we now know there are a lot of other options. We’ve also come to have a deeper understanding and appreciation of contributions that can be made at any scale to urban planning. The presentations do make a difference in our everyday work, especially in reviewing policies and regulations.”

Shortly after the training with national government agencies, the workshop series rolled out in the five project partner cities.

The Building Climate Resiliency through Urban Plans & Designs  project is supported by the Federal Ministry for the Environment, Nature Conservation, Building and Nuclear Safety under the International Climate Initiative.
Download the project brief here.
For regular activity updates, follow BCRUPD online on Twitter and Facebook.

The Philippines is extremely vulnerable to climate change, with as much as 70% of its cities located along the coast. Settlements in these areas are exposed to hydro-meteorological hazards aggravated by climate change, like sea level rise, stronger typhoons, and storm surges. Regular flooding in cities undermines infrastructure, disrupts economic activity, and impedes the delivery of services. This increases the vulnerability of the urban poor as well as new migrants who tend to live in informal settlements located in environmentally fragile and dangerous areas, and who are without resources to bounce back when disaster strikes.

In this context, the Building Climate Resiliency Through Urban Plans and Designs project, or BCRUPD, aims to support the Philippine government in improving policies, regulations, and capacities to adapt to climate change through the promotion of climate-responsive sustainable urban development plans and designs. END_OF_DOCUMENT_TOKEN_TO_BE_REPLACED 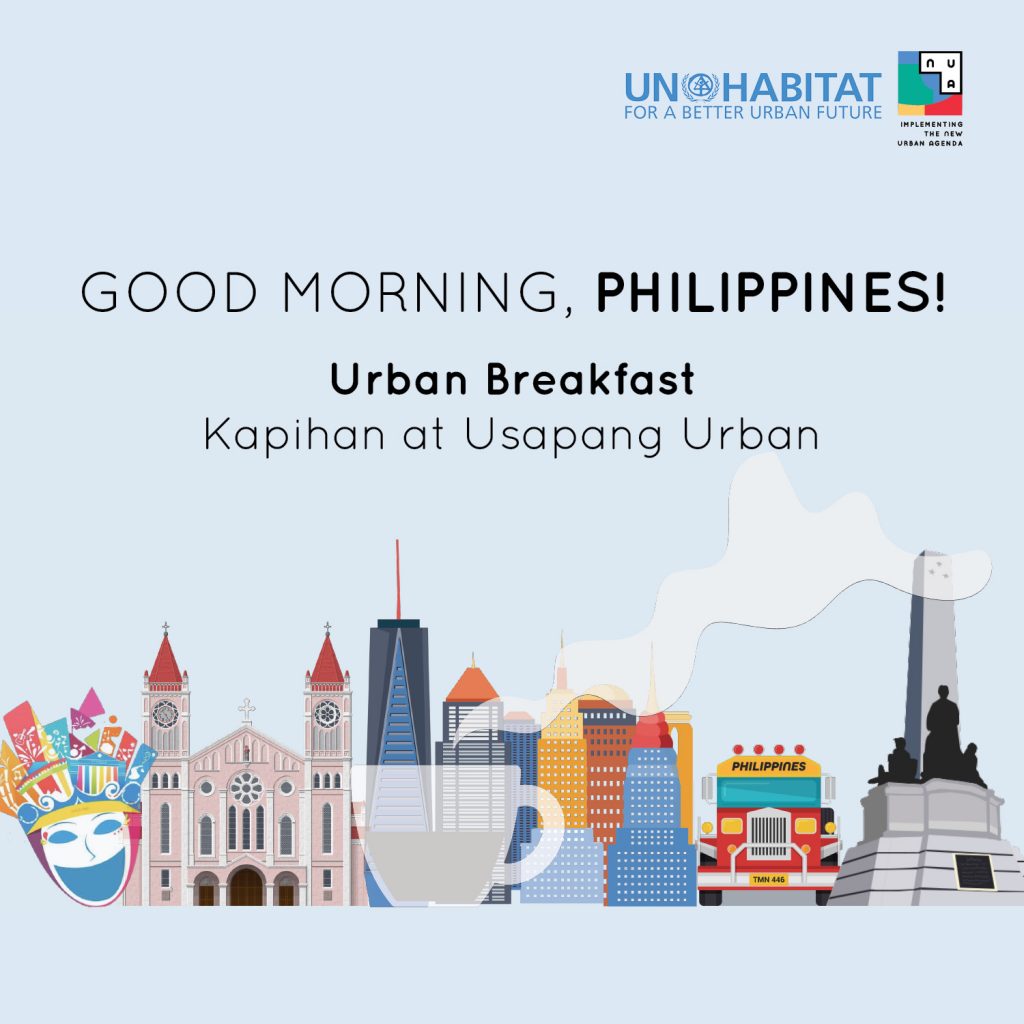 Exactly a year after the United Nations Conference on Housing and Sustainable Urban Development (Habitat III) in Quito, Ecuador, the first Urban Breakfast in Asia-Pacific was organized by UN-Habitat Philippines and held in Quezon City.

An advocacy activity initiated in the lead-up to Habitat III, Urban Breakfasts are conducted in collaboration with various esteemed partners. They’re aimed at creating illuminating and refreshing dialogue between key speakers and the audience to reflect on challenges facing sustainable urban development and key considerations in implementing the New Urban Agenda.

The Urban Breakfast in Manila, held on 17 October, kicked off the first training workshop for national government partners of Building Climate Resiliency Through Urban Plans and Designs, a German government funded project with UN-Habitat Philippines as the lead implementor in partnership with national government and five partner cities.

The breakfast, locally dubbed Kapihan at Usapang Urban (Coffee and Urban Conversation), focused on the upcoming 9th World Urban Forum (WUF) as a key platform to review progress cities have made in implementing the New Urban Agenda since its adoption in 2016 and meeting the Sustainable Development Goals. Speaking about the WUF was Lars Stordal, Regional Partnerships and Monitoring Officer at UN-Habitat’s Regional Office for Asia and the Pacific. He highlighted the forum as a good place to facilitate and set up new partnerships and synergies across sectors working towards sustainable urban development, while strengthening existing ones. He also included that 25,000 participants were expected to attend the WUF. While several Philippine mayors and civil society groups have been regular WUF attendees, the discussion on the upcoming forum, slated for February 2018 in Kuala Lumpur, Malaysia, was especially interesting and informative in view of its role as a follow-up to the New Urban Agenda and as the first global convening of urban actors and governments after the Habitat III Conference.

The second speaker for the breakfast, Attorney Avelino Tolentino, Deputy Secretary General of the Housing and Urban Development Coordinating Council in the Philippines, was a key government official in the preparation of the country’s National Urban Agenda and a delegate to the Habitat III preparatory process as well as the Conference. Attorney Tolentino spoke on the Philippine experience in the development of the New Urban Agenda and its journey on the path to sustainable urban development through localizing the New Urban Agenda principles of better, greener, and smarter cities for local material advocating a more inclusive Philippines, strengthening the rationale behind Philippine participation at the World Urban Forum and ultimately underscoring how Kuala Lumpur was the natural next stop in this journey. “We are in the process of forming the national delegation for the WUF,” Tolentino added.

The Urban Breakfast, moderated by UN-Habitat Country Programme Manager Cris Rollo, was attended by around 50 key personnel from national government agencies, and seamlessly transitioned to the training workshop proper with technical presentations made by Climate Change Adviser Laids Mias-Cea and Urban Planning Adviser Thomas Stellmach, both of UN-Habitat.

The Urban Breakfast was streamed live on Facebook to enable access to the discussion by a wider audience and may be viewed here.

The “Building Climate Resiliency through Urban Plans and Designs” project aims to support the Philippine government in building capacities on innovative climate-responsive planning and designs. As part of this support,  UN-Habitat handed over equipment to the Housing and Land Use Regulatory Board (HLURB) on 15 September 2017 led by UN-Habitat Country Programme Manager Christopher Rollo. Policy Development Group Director Nora L. Diaz led the HLURB team in accepting the equipment.

The HLURB, as the lead government agency partner of UN-Habitat for the project, will use the equipment, comprised mostly of laptops installed with geographic information system (GIS) applications, to train local government planners in developing computer-aided GIS-based urban plans and designs.

“An important part of the partnership is to assist the work of the HLURB,” Mr. Rollo says. “The computer equipment will therefore support the project in a way that will help the cities we will be working with in the long run.” This view was shared by Ms. Diaz who also added that the support is, “not only for the PDG (Policy Development Group) but for the cities and eventually (for) all our regional planners and local government units  in the country.”

Other key government partners of the project are the Climate Change Commission (CCC), Department of Interior and Local Government (DILG), Housing and Urban Development Coordinating Council, National Economic and Development Authority (NEDA), and League of Cities of the Philippines (LCP).

The five partner cities of Angeles, Legazpi, Ormoc, Cagayan de Oro, and Tagum, which serve as the project’s demonstration cities, aim to strengthen the coordination and processes among stakeholders and national government agencies in improving policies, regulations, and capacities to adapt to climate change through the promotion of sustainable, climate-responsive urban plans and designs.

The project is part of the International Climate Change Initiative (IKI) and supported by the German Federal Ministry for the Environment, Nature Conservation, Building and Nuclear Safety (BMUB), on the basis of a decision adopted by the German Bundestag.